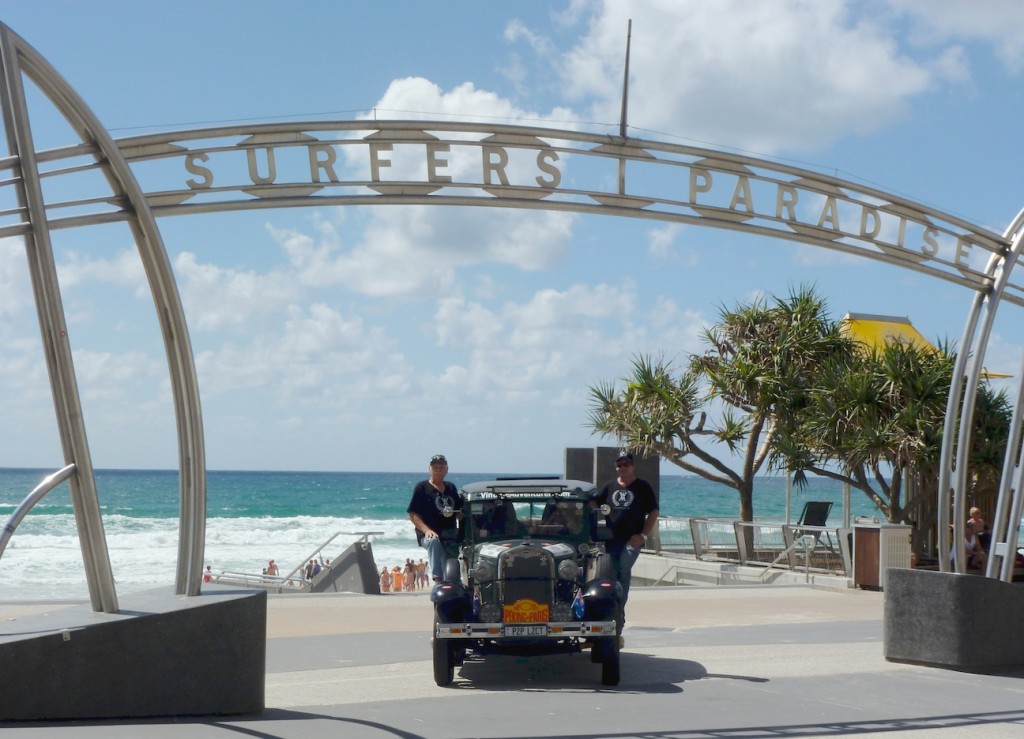 Rod and Austen at the iconic Surfers Paradise sign – starting point of the O2O Australia.

Vintage Adventurer Rod Wade is getting back behind the wheel as he attempts to drive across Australia – and back again – in less than 100 hours in another fundraising challenge.

The Ocean to Ocean Australia Challenge will see Queenslanders Rod, aged 71 and co-driver Austen Ritchie, aged 37, depart Surfers Paradise, Gold Coast, on Tuesday 3rd June, armed with a bottle filled with water from the South Pacific Ocean, in a 1930 Ford Model A, driving around 4,500 kilometres non-stop to Fremantle, Western Australia.

On arrival at Fremantle, Rod and Austen will empty the water into the Indian Ocean and tip a bucket of Gold Coast sand onto the beach before refilling the vessels with the same from the Coral Coast. Then it’s straight back on the road with the aim of arriving back at Surfers Paradise by lunchtime on Saturday 7th June, making the total distance around 9,000 kilometres.

Vintage Adventurer Rod Wade set a new world record, driving against the clock from New York to California in his 1930 Ford Model A, paying homage to H. Nelson Jackson and Sewall K. Crocker, the first to drive coast-to-coast across America 110 years ago.

Rod and his co-driver Michael Flanders travelled through ten states as they tackled the 2,947mile (4,734km) drive in just over 50 hours. Their planned route included the Lincoln Highway, the pioneering American transcontinental route championed by Henry Ford, and part of Jackson and Cocker’s original crossing, as well as down sections of iconic Route 66.

They started their non-stop journey by filling a bottle with water from the Atlantic Ocean, just off Staten Island. The water was thenpoured into the Pacific Ocean when the team arrived at Venice Beach, Los Angeles. That’s when the clock was stopped and the new world record was set. 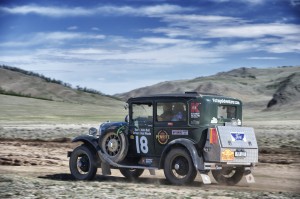 The Vintage Adventurer completed it’s first adventure in 2013 as Rod Wade and John Bell travelled the 8,000 miles from Peking, China to Paris, France in just 33 days in their 1930 Model A Ford.

Said to be the world’s greatest motoring challenge, the Rally was organised by The Endurance Rally Association and travelled through some of the most isolated places in the world . . .

Throughout the journey, the Vintage Adventurer team raised money and awareness for Kidney Health Australia (www.kidney.org.au)

Date to be confirmed

The Vintage Adventurer, Rod Wade, and his team will attempt to break the record for quickest overland journey from London to Cape Town.

The team will travel over 16,000kms through 20 countries, only stopping to refuel. They will cross the borders of some of the most precarious and dangerous countries in the world and cross the Red Sea.

The team is made up of 3 drivers and 6 support crew including security, medical and film crews. Along the way, they will film their adventurers using six GoPro cameras mounted on the car together with handheld cameras and quad-copters. The quad-copters will have cameras mounted on them to relay footage back to the car where it will be stored until it can be uploaded.

The team will start in London and driving through Europe, Turkey, somehow to Saudi Arabia, then across the Red Sea to Sudan, Eritrea, Ethiopia, Kenya, Tanzania, Zambia, Zimbabwe, to Cape Town South Africa. The team will cross some of the world’s most diverse scenery, cultures and some hot spots which will create safety concerns