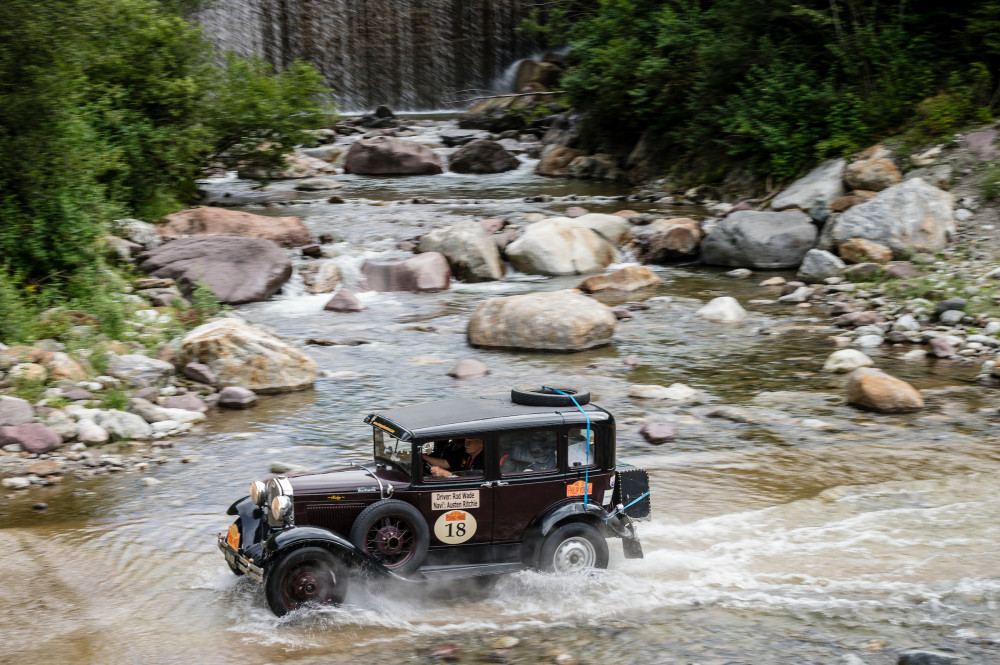 Rod and Austen left Slovenia on time and found a tyre place, taking the donut off the front and putting Toyo 600-16’s radials on the rear, and running the 19″ on the front.  They have only two good 19″ rims.

“With the new large Toyos on the back, the car is handling like a BMW,” claims Rod. “To end up at our hotel for tonight in Italy, we drove for 11.5 hours and must have gone around at least 1,000 corners through the mountains. Some corners were 300 degrees and steep. We drove in second gear up hills for hours.

“I am so glad I had good brakes. I had to replace an axle key again because the shim was left out when the garage did it. I pined the key way in the axle back to somewhere near what it should have been and rotated the key 1/4 turn, put a shim in and tightened the nut really good.  It has made it to the hotel but I will take the hub off in the morning, degrease it add some lock title and tension the nut and we should get to Paris.

“This has been and still is a real challenge.  We will end up with silver if we make it.”

If Rod thought the journey into Italy was tough, the route to St Moritz in Switzerland was even more difficult.

“Ruby handled it all ok and the brakes were just brilliant. There was a lot of second gear work in the morning and first gear climbs in the afternoon. The corners were more than 180 degrees in many instances and were switch backs. Hard on the arms and rotator cuffs and sore muscles across the back of the shoulders but all in all I am ok.

“We went over the pass at 2310m to St Moritz with stunning scenery and snow on the roadside. Our hotel for the night was five star and the showers were great. With two shower heads, I put both on as hot as I could bear to try and ease the muscle pain.

“Tomorrow it will be similar to today as we head for our next overnight at Lausanne.”