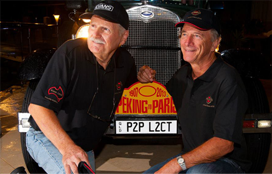 Co-driver and navigator, Peking to Paris 2013

Born in Kavieng, New Ireland, John is now retired and lives at Airlie Beach, Queensland, with his wife Carol. They’ve travelled widely both internationally and within Australia. He’s lived in New Guinea , Tasmania, Queensland, Western Australia, a year in Europe and half a year in S.E. Asia.

He’s grown Macadamias and run cattle, been a restaurateur, wildlife park owner, property developer, storage operator, senior public servant, practicing solicitor, Justice of the Peace and tax agent, as well as grown tropical fruit commercially. He’s been a paper boy, worked as a surveyor’s chainman, brushed scrub, worked in a timber mill, been a prelim. boy in the old Brisbane Stadium, cut cane both burnt and plants, picked tobacco and picked fruit along the Murray River .

He has been part-owner and manager of ships both charter and tramp working from Europe and around the S.W. Pacific into Kieta, Bougainville on a regular basis, and Amamapare in West Irian. A keen sailor, water skier, pilot and spear fisherman, he completed National Service in the Royal Australian Navy. He loves the ocean and the reef, boating of any kind, his wife, family and good friends.

Where did Rod meet John Bell?

I met John Bell in the early 80’s in Airlie Beach where I bought some land from John. We lived alongside of each other on acreage for years as we both developed our land. Our time together in Airlie Beach was memorable including the times we spent in my speed boat that John’s daughter Luci called “Fright Boat” because of its speed and height it used to fly out of the water at speed.

I sold out of Airlie Beach in the mid 80’s but retained my relationship with John and the Bell family.

In May 2011 after returning from Africa we were holidaying in Airlie Beach and over dinner I told John I had an adventure that was so far out there that he just had to join me and he agreed and it has been all go with the planning since that time.