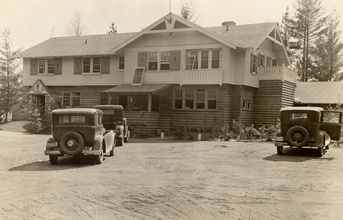 The 1930 Model ‘A’ Ford is perhaps best known as the car that helped the infamous bank robber John Dillinger escape police after they had surrounded and sprayed the Little Bohemia Lodge with bullets in April 1934.
While the ‘great getaway’ was executed in a coupe that would later be restored for the movie “Public Enemies” in 2007 and sold for $165,000, Rod is equally sure that his meticulously restored Tudor will honour the slogan suggested by Dillinger in his cheeky letter to Henry Ford “. . . drive a Ford and watch all other cars fall behind you”. 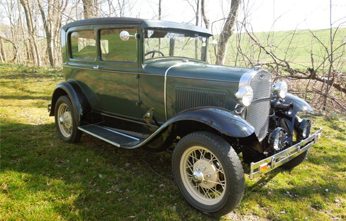 Rod purchased the 1930 Model  ‘A’ Ford from a collector in Pottsville, Pennsylvania. USA and had it overhauled in Strasburg, Pennsylvania.

The car had family history but one thing that caught Rod’s eye was a decal on the windscreen that said “This Model “A” has toured the Indianapolis 500 Motor Speedway 1991 MARC National Meet June 28th 1991”.The previous owner really didn’t want to part with the car, but needed room in his garage for another Plymouth Prowler. Yes, his third Prowler! 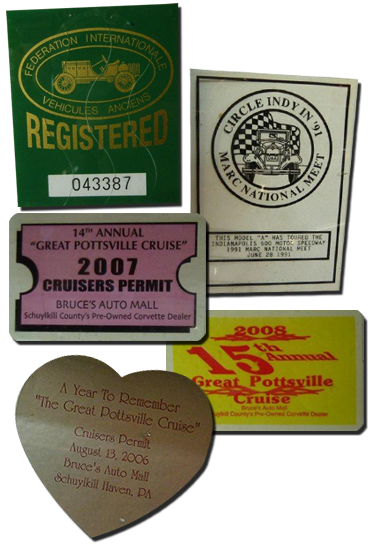 Rod intends to add to the rich history of his Model A and would love to also do another circuit of the Indianapolis Raceway in 2014 when the car returns to Australia via the USA.

The car, as it stands today, is virtually as it came off the production line in 1930, except for some modern brakes and a few minor changes. The car is registered with FIVA as a compliant 1930 Model ‘A’ Ford.

Some comfortable seats have been added as well as modern driving lights and navigation equipment and some modern shock absorbers. 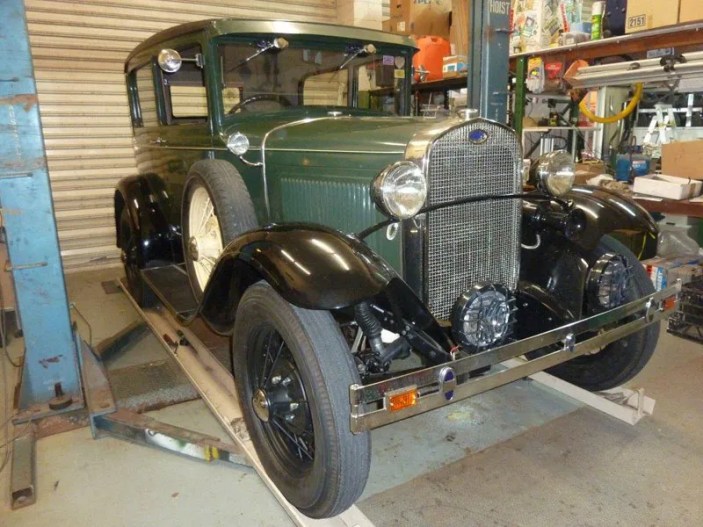 The 1930 Model A Ford on the hoist ready for rally preparation. Rod keeps up his fitness levels Rear Axle Housing – Removing the rear end so that the gearbox can be removed. 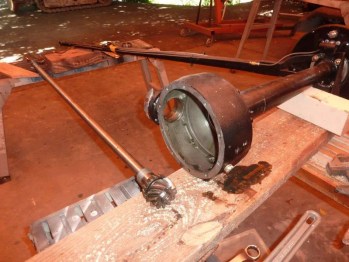 Drive Shaft and Axle Housing – Removal of the drive shaft to check the crown wheel and pinion by bluing off the meshing of the teeth. 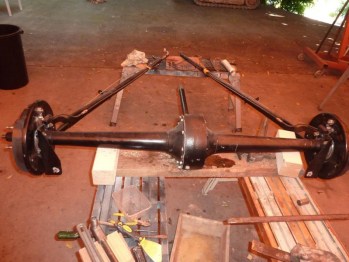 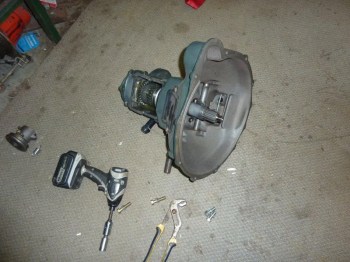 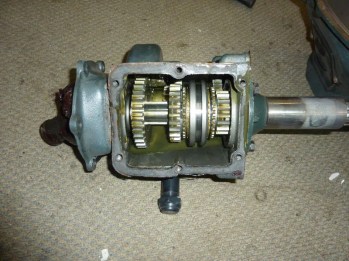 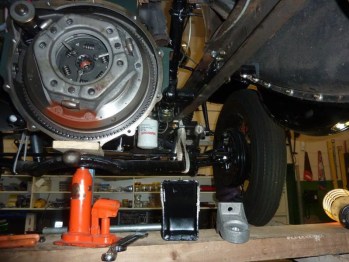 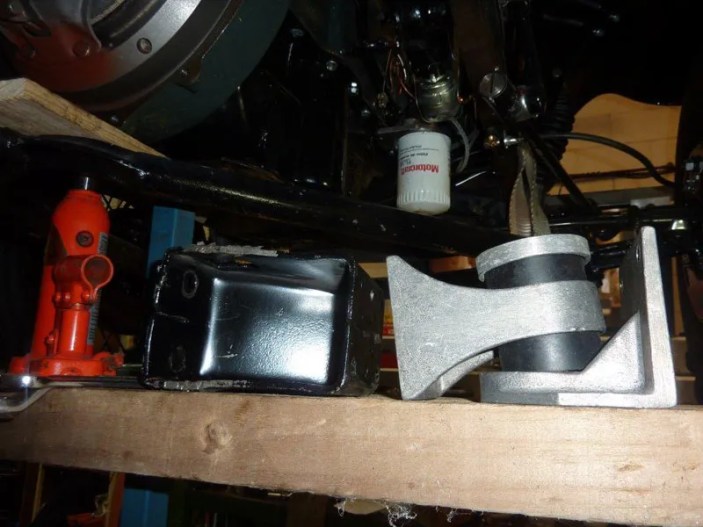 New Gearbox – about to be lifted and bolted in place. Gearbox & Engine Mounts – The new gearbox is fitted. The new engine mounts are great and will lessen the vibration. 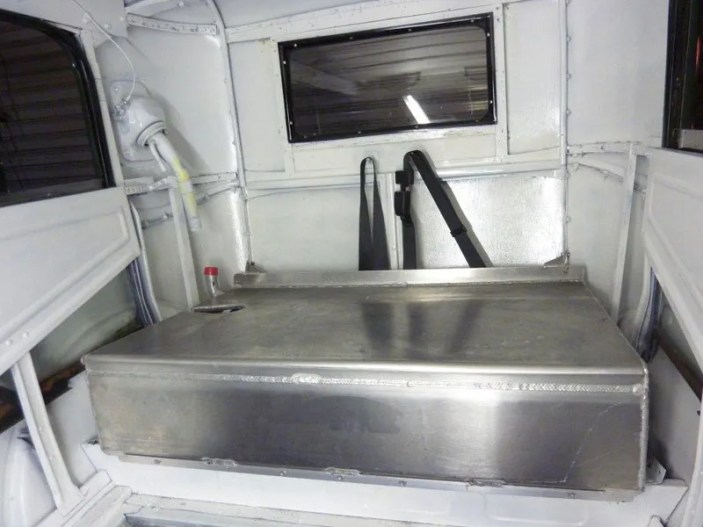 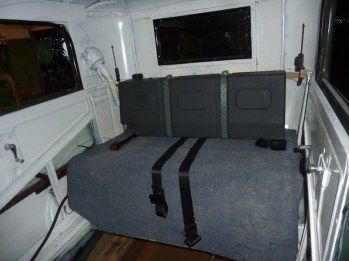 Water Tank – New 60L water tank to be connected via a pump to 4x window washers (2 per side) and will also connect to the radiator so that water top up can occur on the run using a specially designed system. Break Master Cylinder – The 1930 needed a brake upgrade from mechanical to hydraulic. I used a twin cylinder type via an adjustable compensating valve accessed from the driving position through a flap in the floor so that the brake bias can be adjusted front to back. When there are slippery conditions the bias needs to be adjusted up for the rear bakes and considerably down for the front otherwise steering ability is compromised. If the front wheels are locked there is zero directional steering. 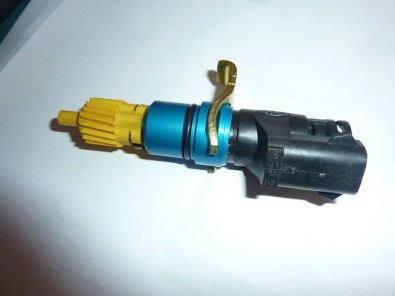 Speedo Sender Unit – This is the sensor unit that I am fitting to the output shaft of the gearbox and the signal will be split to activate both a digital speedometer and a Monit Rally meter. The Monit works from both impulse and satellite and makes adjustments accordingly. When on the autobahns of Europe and when going through tunnels the satellite signal is lost so the impulse signal takes over. Wheel spin can also effect trip meters so to be able to have the Monit with its dual signal input is just magic. 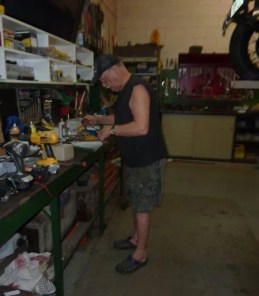 Fabrication – Making up a guard for under the car to protect vulnerable brake lines. 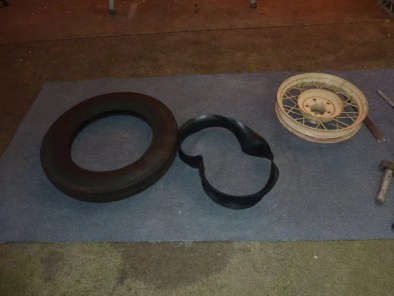 Fitting of the spare wheel – It is important that top grade inner tyre protection is used. This is a 6ply tyre with a heavy duty inner band to protect the tube from the rim. Talc or No Talc – No matter what you read about talc or no talc, I can tell you from my experience that it is really important to use talc for many reasons. The tube needs to be able to move within the tyre and allows for deflation at times for sandy ground and sometimes mud. On the highway if the tyre and tube are not independent (no talc), as the tyre heats up the tube will adhere to the inside of the tyre and sometimes to the extent that the tube is stuck so bad it will tear when trying to remove it to repair a puncture. 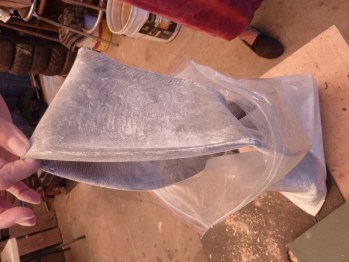 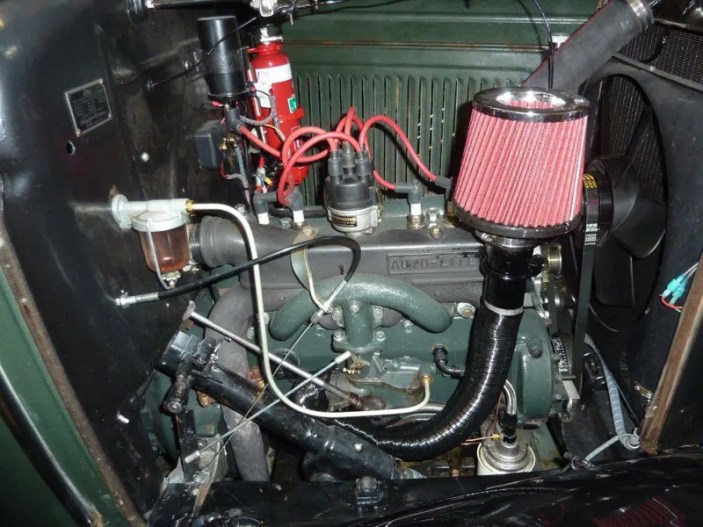 The Ford was originally designed for left hand drive and when converted to right hand drive the steering column made it nearly impossible to fit an air cleaner to the carburettor inlet and nearly all Model A cars that were RHD ran without an intake filter!!! It is vitally important to fit an intake air filter.Notice the dual accelerator linkage. The existing linkages remain but I have fitted a conventional cable operated right hand accelerator. The original accelerator pedal was between the clutch and the brake pedal and this position really leads to ankle soreness after a few days of rallying. 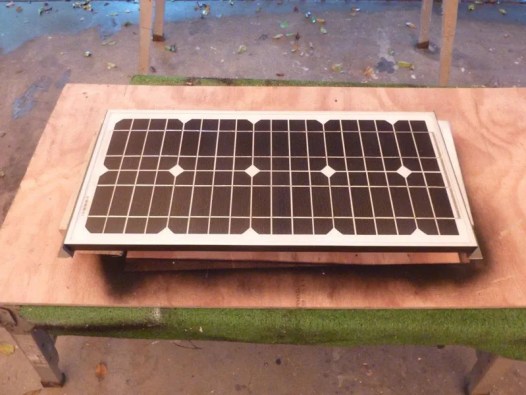 Solar We will have two batteries in the car. One for the engine and another to operate cameras and other electronics. The electronics battery is a gel Optima battery and is kept charged via the solar panel. Most electronics draw only milliamps so a 20W panel is sufficient. 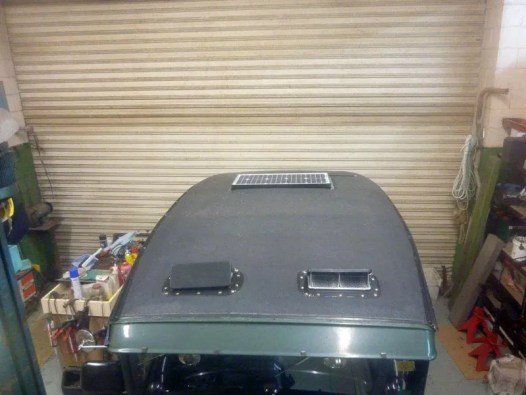 Solar Panel Placement – The solar panel is fitted to the roof of the car and well out of sight. Notice the ‘vent scoops’. These are adjustable to either push air in or suck air out. In the photo the vent on the right is set to force air in and the one on the left to such air out. These are simply adjusted from the seating position in the car. 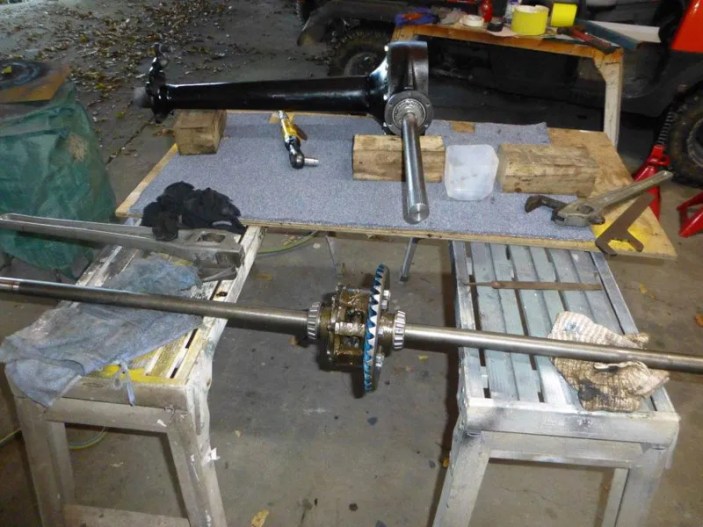 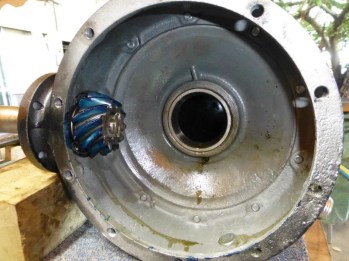 The crown-wheel after being blued off and reassembled into the rear axle is rotated to leave the meshing imprint. It is really important to adjust the meshing of the crown wheel to the pinion to correct tolerances. This one is now perfect (5 hours work) and ready for reassembly and closing of the axle housings to the central banjo. It is advisable to fit new bearings at all times. 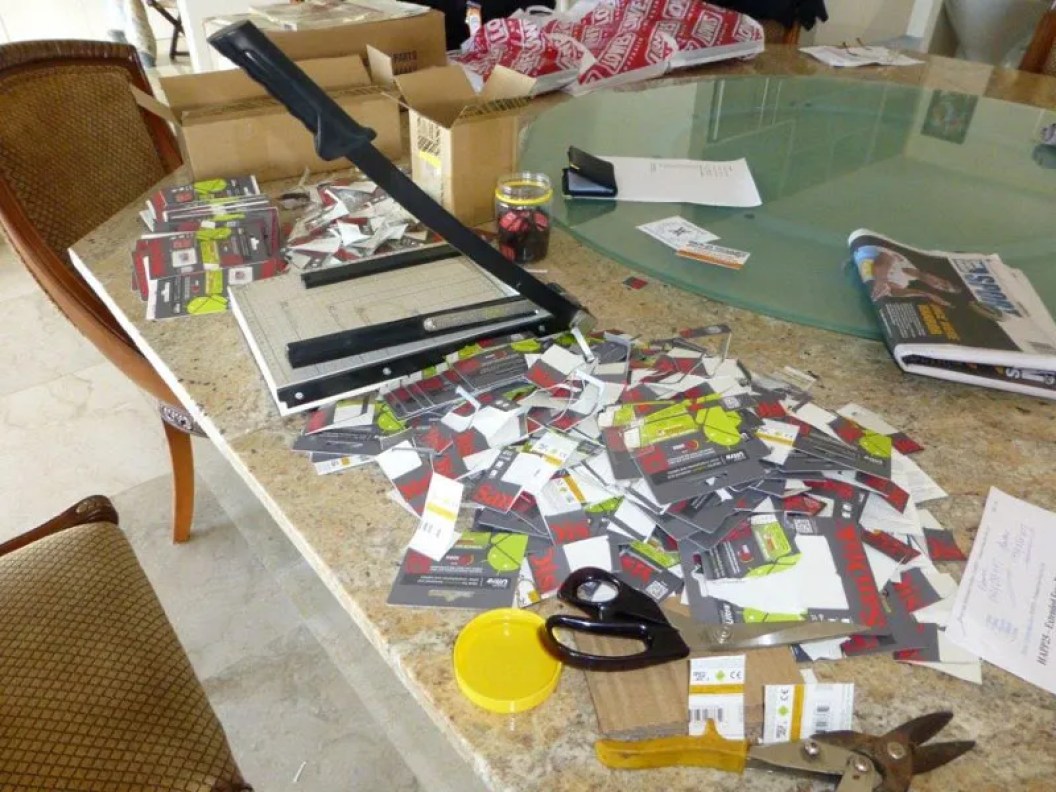 Preparing by removing the tamper proofing packaging of 200 SDx64GB cards for the 7 GoPro cameras that will operate in and around the car and record the P2P journey frame by frame. We will change the cards in the cameras every day because there are no facilities to upload the images daily for the majority of the rally. An expensive option to uploading but a safe one. A mammoth task at the end, for the post production team.