Thanks from Rod Wade 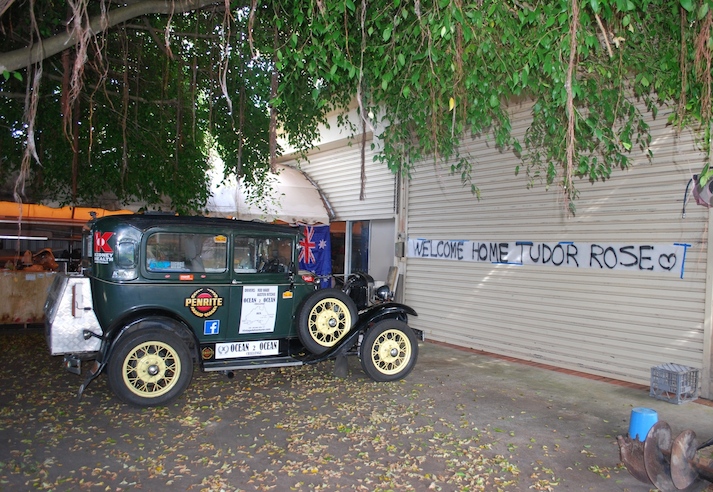 08 Jun Thanks from Rod Wade

After a sleep in a proper bed after completing a double crossing of Australia in 101hrs I keep redoing the drive and working out just how to do it again and faster and better. I have been over and over in my mind just how to do that and the only way is to go faster to save and bank minutes.

So why did we do so well this time straight up…put that down to the wonderful support crew. I have never experienced such dedication to the cause from people that new jot about what to do and how to do it in real terms the day before we departed.

I will never forget the looks on the faces of the entire crew at the pre-briefing a couple of days before we departed Surfers Paradise as I talked about what they were really getting themselves into.

I was a tad apprehensive after the briefing but I was in for a treat because as it turned out, they were the best support crew anyone could wish for, and frankly without their dedication, thoughtfulness and willingness to do whatever it took to be sure Tudor Rose was ready to go in quickest possible time when we did fuel stops, we wouldn’t have achieved so much.

When the head gasket blew and we needed to do a roadside fix, and quick, I experienced an amazing spectacle as the support crew went into action. This was their first ever real look at the mechanicals of a 1930’s engine. What I envisaged to take many hours was over in quick time as everyone did their bit to see that at every second I had in my hand the spanner I needed. My tools had been rearranged on a piece of carpet on the ground like surgical instruments…and they were exactly that.

Austen as a co-driver was far better than any I have ever had and I give the biggest thanks to him for his constant support.

The fuel stops worked like a Swiss watch, everyone did their bit and more. I was able to just get out of the car go to the rest rooms and come back to the car to find it ready to go. It has never been like that before and I knew that there was every chance that the Ocean2Ocean OZ Challenge was going to be the success that it has been.

With the mechanical difficulties that we had we needed to top up the spares bin with more parts. The crew were quickly on the job at 1am in the morning putting together a ‘source’ list of possible suppliers because we needed a spare head for the engine (just in case) head gaskets, water outlet neck (short) plus other odd bods. We had those in quick time starting from 6am and had them in the van at Fremantle ready for the return journey across Australia. That is how good the crew were and how good the people were.

So what do I say even though I know it is far from enough, but THANK YOU CREW, CAMERAMAN AND THE WONDERFUL PEOPLE THAT I MET ALONG THE WAY.

A SPECIAL THANK YOU TO THE POLICE AT COBAR THAT DID EVERYTHING POSSIBLE TO ASSIST US AFTER THE VITO WAS PUT OUT OF ACTION BY A ROO STRIKE.

THANK YOU ANDREA FROM POPPYSEEDMEDIA UK, FOR YOUR MANAGEMENT SKILLS AND HAVING THE ABILITY TO CONTROL THE CREW AND TO GIVE ME ADVICE, EVEN IF I NEEDED IT OR NOT!!!

Everybody count yourselves in for my next adventure. I may not be able to you all but I will take as many of you as I can…I could never find better people.

THANK YOU AUSTRALIA AND THE SPONSORS AND DONORS that tipped into Rod Wade Everyday Hero to donate and contribute to the fund to build the next of the Kidney Kampers.

At the start we were greeted by hampers of fantastic breads and pastries from Devour bakeries and the same when we arrived back. Thank you Daniel and Shaneen.

The o2o OZ and the success that it has been was enhanced by the support that we received along the way from people that we had never met or even knew. Thank you all.