After the icy conditions of Amarillo, no one expected snow fall on the route to Albuquerque. For Aussie Michael, it was the first time he’d seen snowfall in his life. Rod was nonplussed though as realising that the lack of dramas and the pace they were motoring at, thanks to the rebuilt engine by Ora Landis of Schwalms, they could get to Venice Fishing Pier in LA on Saturday night.

“Let’s set a time that’s hard for others to beat” said Rod as he drove out of the fuel stop, the support crew racing to keep up with both Rod and the Model A. 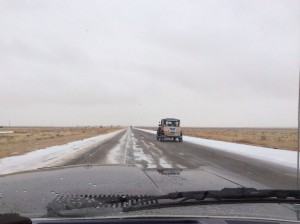