There were no dramas as Rod and Michael headed for Columbus, Ohio, and Indiana. They waved at Zanesville, where they were delayed four hours with cooling problems on the first attempt. No dramas then… Well not for them.

The four-strong support crew in the 1988 Plymouth had to take on extra luggage to lighten the load for the Model A. Plus they had to stop for gas three times compared to Rod’s once. Trying to stick with the Model A, the crew left it a little too late to refuel, not banking on a dodgy fuel gauge, and found themselves on the sidle of the interstate waiting for AAA to bring them a canister of gas. Thank god for their speedy service as the crew was back on the road within 30 minutes. But they were still playing catch up… 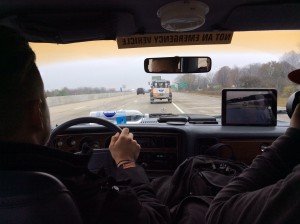