Gearing up for Peking to Paris 2016 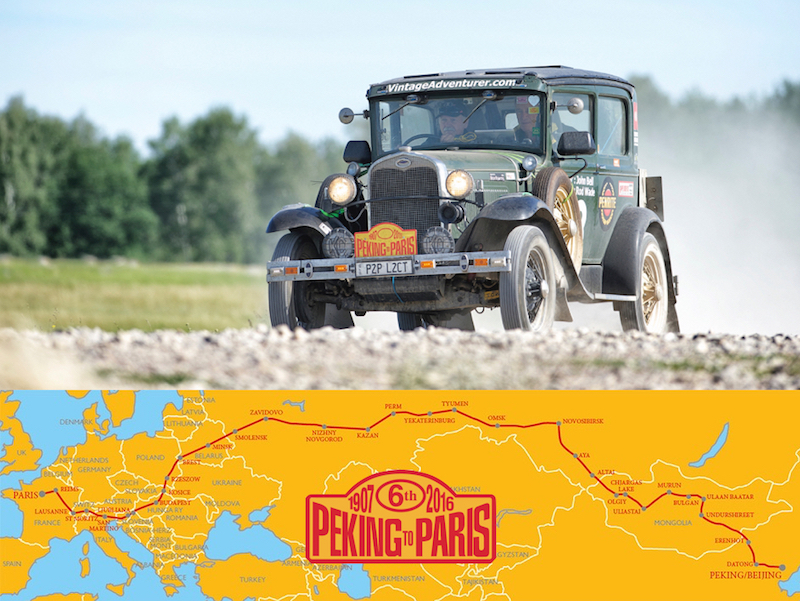 It seems that ‘vintage adventurer’ Rod Wade can’t get enough of motoring challenges – so much so that he’s taking on the World’s great motoring challenge once again as he gears up for the Peking to Paris 2016.

Having already competed in 2013, Rod is fully aware of what to expect from the 36 day rally which starts on Sunday 12th June from the Great Wall of China in Beijing. The event featuring 110 vintage and classic cars then journeys through Mongolia’s Gobi Desert, Russia, Belorussia, Poland, Slovakia, Hungary, Slovenia, Italy, Switzerland, and finally to France and the finish line at Place Vendome in Paris on Sunday 17th July.

For co-driver Austen Ritchie, this will be the longest event he has been involved with having previously sat beside Rod on the Ocean2Ocean Challenge – Oz where the team drove across Australia and back again against the clock.

This time the team will cover 13,695 kilometers (8,510 miles) so its all about preserving the car and reaching the finish line. Speaking of the car, Rod’s faithful Ford Model A ‘The Tudor Rose’ is getting to rest up so number 18 will be emblazoned on her four-door sister from the blue oval family – Ruby, a 1930 Ford Model A, specially prepared for the challenge.

“After completing the 2013 P2P, which was a fantastic experience and for me it was a game changer, I wanted to do it again but needed a better car,” explains Rod. “In September 2013 I was in the USA hunting for a 1930 Model A Ford but a 4-door model called a ‘Fordor’ by Henry Ford!

“I was so impressed with the 2013 P2P car – the 1930 Model A Ford 2-door ‘Tudor Rose’ that I wanted to do better in 2016 and the only real improvement on the Model A was to have 4-doors instead of two to make it easier to get the gear in and out. The 1930 Model A Ford Fordor achieves that goal.

“I located a 1930 Fordor in Hamilton Texas USA and it fitted the bill exactly, I did a test drive and this baby was as tight as the day it was made and all absolutely original.

“With a genuine 103,000 miles on the clock, ‘Ruby’ as she is known, still has some work to be done but I am not doing a repaint and intend to leave all the ‘patina’ as it is. She’s a game old girl who will be up to the task when I’ve finished with her.”