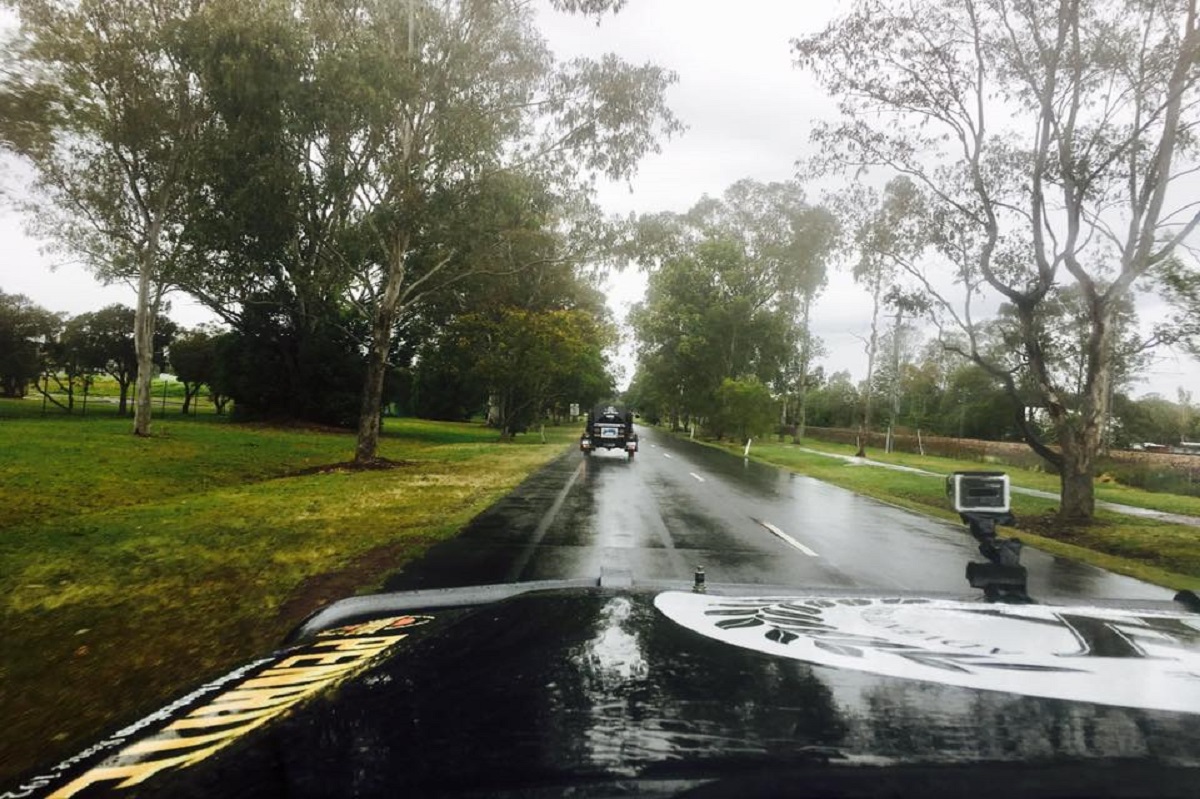 Having spent the day at home base yesterday, with a fully equipped garage, we didn’t miss the opportunity to give The Rattler an oil change. After straining the oil we found very few filings that most likely came from the aluminium timing gear and backing plate. There were no metal filings from the bearings. As always, the Penrite Oil with its high zinc content is doing a marvellous job. We also topped up the underdrive box and differential with Penrite oils and used their special high temp grease on the nipples all around. I’ve been using Penrite oils since 1988, and they have proven so reliable over the years that I have never had a failure of any component when using it.

Today we were all eager to say goodbye to the Gold Coast and head North with two additional support vehicles, the Fuso and the Vito. It should take us another two weeks and one day to make it up to the tip of Cape York and back.

The weather forecast wasn’t promising this morning and soon the grey skies were filled with rain clouds! By the time we got to the Sunshine Coast, about an hour North, the heavens opened up and engulfed The Rattler. Nothing much changed for the next 600 kms!

The Rattler is a left hand drive vehicle. When I first found her, she had a beautiful coach body which was not at all appropriate for the Australian desert or Cape York. So I carefully removed the body and now she has no doors, windows or hard top for that matter. When cars or trucks pass her, air pressure forces road spray and rain into the passenger side of the cabin on the right. As the trip North is on the main highway, there is no shortage of passing vehicles.

Don was at the wheel again today, with Mark at his side ready to take one for the team each time the trucks flew by heading South. It was also a bit chilly with the temperature hovering around 13 degrees centigrade the whole day. But there is just something about riding in The Rattler that makes you smile, and the rain just makes you feel alive! After a few hours of rain pounding, the boys used a little ingenuity and scavenged some old plastic shop signs from a service station, which they used as doors to keep most of the water out. Don and I used the same trick with pieces of cardboard on The Desert Rattler Run through the centre of Australia. With that problem solved they motored on into the afternoon with Don resisting every opportunity to let me take wheel and give him a chance to dry out in the support vehicles. As I said, driving down the highway in The Rattler just makes you smile, and exposure to the elements only heightens the senses and reminds you how blessed you are to experience this journey.

As we pulled into the first servo in Rockhampton this arvo, Don noticed air leaking from one of the rear tyres. I’d say that was very good timing, as the tyre quickly deflated. After filling her up and changing the wheel, The Rattler was back on the road and headed for our overnight stop at a very comfy and welcoming motel in Rocky.

First thing on the agenda was to get to the bottom of the tyre issue, with three flats now under our belt. On the black top we are running the cheese cutter tyres, and with the high speed they are not proving to be reliable. I can’t wait to fit the BFGoodrich Tires (the mud fats) at Bramwell which is the last stop before we enter the Old Telegraph Track. We shouldn’t have these troubles with those aptly named mud fats!

Tomorrow we are heading North with Cairns almost in our sights. It’s going to be a long day, as we hope to cover at least 880 kms. I’ll be in The Rattler and on the road at 5 am on the dot. I’m on a mission to cover as much ground as possible, and take whatever the weather wants to throw at me. Nothing is going to stop this road train from making it to the Old Telegraph Track!

So it’s night night from Rocky, and, as always, hooroo!