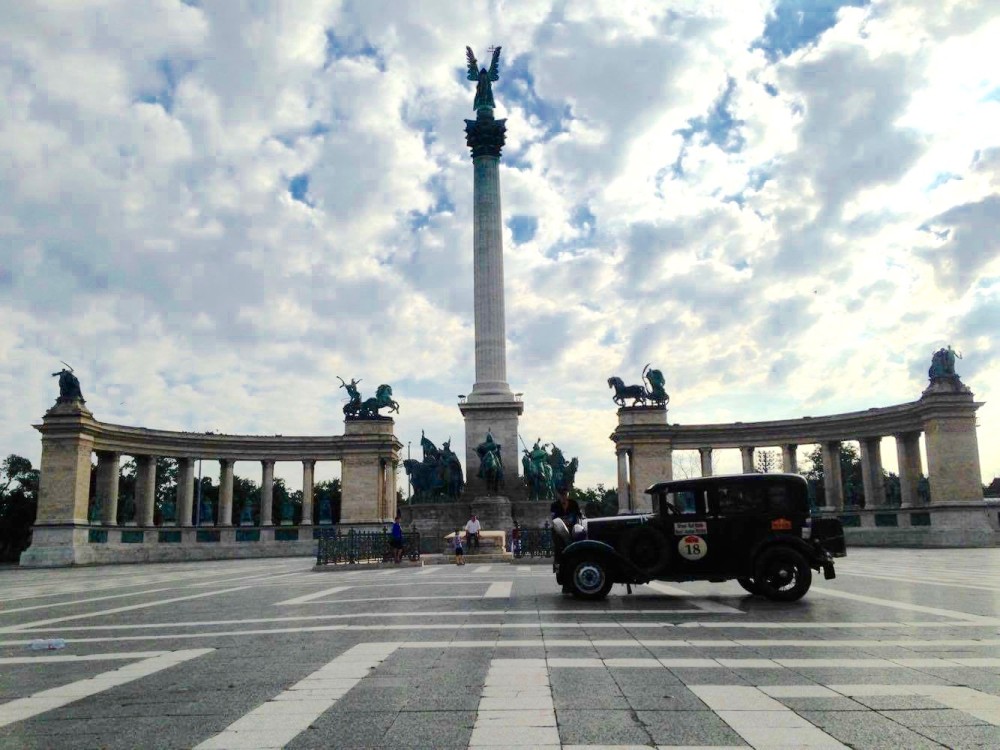 The Vintage Adventurer crew has arrived in Budapest – with only a slight drama. Rod and Austen had to change a tyre on the rear that was down to the canvas. They were just 80k from Budapest and put on their last worn tyre. Today featured four speed sections in the forest and two on very rough broken asphalt with considerable holes just to test the reflexes. They crew did well but no matter what they do it is near impossible now to end with a better position than they have at present.

“Poor Ruby is one sad puppy,” Rod jokes. “We have a few hours tomorrow – rest day – to changing to the four new tyres sent to Budapest from Snyders Antique Auto Spares in Springfield OH, USA. Thank you once again Don for coming to our rescue.

“Tomorrow being Sunday will restrict availability of the garages. We really need to adjust the tap pets, change the oil filter and oil and generally service Ruby but time may restrict us to just tyre changes although this is the last rest day before Paris. “We will do what we can and hope it s enough to get us to the end without a further mishap.

“When we arrived yesterday all was good and ever better for Austen, as his wife Emily had sent him a care package, clean undies, deodorant, some red pencils and clean shirts and some pro tine bars! How lucky is Austen!”

Sunday’s rest day started with the guys fitting the new tyres from Snyders plus other bits and pieces including an oil change and for once the team were all done by 10.30am, giving the remainder of the day to enjoy.

“I love this city,” says Rod. “It is an introduction to Europe, displaying fine architecture and real history. Austen and I did a walk/climb to the castle over the chain bridge to the old city of Pest and had lunch. I lost count of the steps towards our goal at around 100 but we eventually made it.

“Sunday was a sunny day and quite warm with many people seeking shade and a seat. We caught the inclination down and it took a nanno second compared to the ascent.

“We took a taxi back to the car compound where we fitted new filters to the carbies on Ruby. Sshe is standing tall with the new tyres but looks somewhat odd with two Lada Niva wheels as spares.  We only have four wire spoke 19″ wheels left so need to keep the Russian doughnuts just in case.

“Today for me has been an odd day because since departing Beijing, it is the first day ever that I have had the afternoon to myself…so what did I do after having a tonic water…I watched foreign language television in my room and dozed off for a couple of hours!

“I am ready for whatever the P2P throws at me tomorrow.”

Stop Press: Rod caught the attention of the police again today as the fellas parked the car where they should not have, in a pedestrian area, just to take a photo!